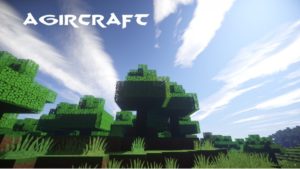 If AgirCraft is simply defined as realistic , it is much more than that. Teimy, its author, is rather stingy of descriptive about him and his realism is the only element that he agrees to point. Right, since with a 64x resolution and carefully crafted textures, it’s the qualifier that most easily comes to mind when you see it. That said, the brushstroke (finally, graphic tablet) of the author suggests something else, like a slight drawing style.

Let’s start with the simplest: AgirCraft is realistic. As we have seen, it sports a 64x resolution that allows the author to display a significant amount of detail , especially in the grain of the blocks. The stone is striated, the uneven wood, the minerals blister the rock … All these details are so many added touches to an atmosphere that is not without reminding that of the basic game. The point that tends to move away from it is the palette of colors of the pack, which sets resolutely on warm and bright colors.

This is what makes AgirCraft unique. With these colors, AgirCraft exudes a sense of dynamism . Added to this is the graphic style induced by the way the author defines the outlines of textures, almost shaking. The irregularities of the textures, which made their realism, thus serve to emphasize a style imbued with lightness, finely drawn, almost childlike.