What this Mod Does: A mod that requires the obtainment of an item before allowing the player to enter other dimensions.

Reason: This mainly is to stop people on Multiplayer servers bypassing early game, but can be used for other reasons.

These are comma separated as stated and are formulated “modID:itemName” as per the default value or if metadata is required “modID:itemName:meta” otherwise all meta values will give the achievement. (Meta removed in 1.13) 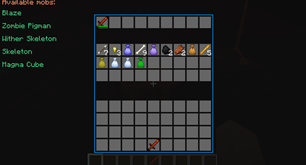