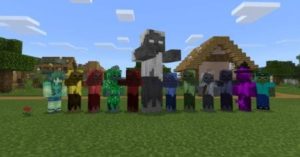 If you think that there should be more zombies in the game , then we completely agree. And along with this, we introduce the More Zombies mod , which not only increases the number and types of monsters, but also adds unique behavior to each zombie species. The addition includes 9 types of new zombies .

Of the 12 types of mobs, two will be neutral , that is, attack only when provoked:

Everyone else will attack the player as they approach.

A skeleton horse will naturally spawn in the world.

Neutral zombies will spawn during the day, and hostile at night. The boss spawns when lightning strikes a mob.
Changes in the new version