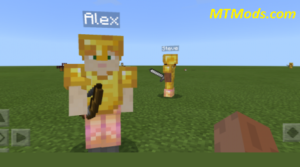 If you feel lonely playing Minecraft , then you should download and install the Fake Players mod . He will add two “players” who will fight along with you. You will no longer be sad and lonely. Let’s get to know your future defenders and partners . The first one is Alex. He attacks with a bow and arrow. The second is Steve. His main weapon is the sword. Hostile mobs will treat new players in the same way as you. That is, they will also attack accordingly.

Their behavior is similar to the behavior of real Minecraft Bedrock players :

You can also trade with new players using emeralds.

When killing zombie players or cadavers, mobs will turn into zombies . It’s hard for monsters to kill players, but it’s still possible. This only applies to untamed mobs.

Changes in the new version