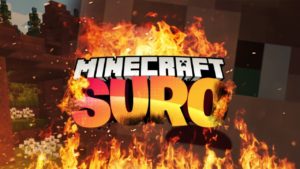 After Minecraft Hero, Minecraft VARO and other YouTube projects were a complete success, another one started in 2019, namely Minecraft SURO from unplayed . Unlike in the previous projects, this time a pre-made map was used, which was created by a builder team. It was built with great attention to detail and of course raised the question in the community how to use it yourself.

There are different possibilities. On the one hand you can play them on the Timolia server of the YouTuber MinecraftExpertDE in 1vs1. The complete SURO game mode is also available on the NeruxVace-net server. However, it is expressly recommended to use Minecraft version 1.14.2 so that everything works smoothly. You can also download them completely from mtmods.com and record them alone or with friends. Either in the state as the map was before the project or the final version after the end. In this season 1 SURO world there are many different structures that you should definitely have seen. Many thanks to Nitrado who published the SURO Maps. However, there is bad news for all players who play Minecraft on their phones,