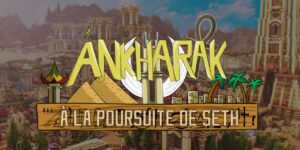 Following our recent partnership with the Endorah team , we have the immense honor of presenting to you in preview the huge project that is Ankharak: in pursuit of Seth . To realize its immensity, let’s immediately give some figures: a 2700 × 2700 map , more than 300 decorated houses and a team of more than 20 people to complete this adventure in nine months. The result is worthy of their efforts and the resulting map has everything to be a cardboard box.

What is striking in Ankharak is its ability to bring together two genres often referred back to back: adventure maps and visit maps . Here, these two facets are both brilliantly represented. In this map, you can visit landscapes and breathtaking buildings, while progressing in an adventure with multiple ramifications.

The origin of Ankharak dates back to a request from the videographer Magicknup , to lead to a huge map in open world, inspired by Breath of the Wild and Assassin’s Creed , whose freedom of movement is found. In a breathtaking adventure, you will be launched in pursuit of Seth, with the future of your people in your hands. On your way will stand trials, riddles and enemies; so many obstacles that you will have to overcome.

I am rarely laudative when it comes to maps, and you can easily imagine that if Ankharak harvest my praises with such intensity, it’s not for nothing. To realize the work of titan done, just look for a moment your field of play. Already, a glance will not be enough, as the only city in which you evolve is immense. Built in an oriental styleit could, with the color of its buildings, melt into the surrounding desert if it were not so generously adorned with plants and did not have so many buildings tutling the sky. Built on the banks of a river, it is intelligently articulated around the river, deploying bridges and aqueducts to make the most of it. In addition to the river, these are two buildings that attract attention, both in their architecture and their gigantism. First, in the center of the city, everything seems to converge on a tower pierced by large windows, a real lighthouse in the middle of the city. She faces a palace, planted in the middle of a raised square, which gives it to see the rest of the city.

But if you move away a bit from the urban bustle, you will see that natural landscapes are not left out. You will sometimes see deserts, sometimes mountain ranges, sometimes beaches … Varied biomes, in short, but all made with care.

And to bring even more depth to your adventure, Ankharak offers an optional system of side quests. To activate it, just download Forge and Custom NPCs to see a cohort of NPCs, which will offer you many quests enriching your game, without being vital to the progress of your game.