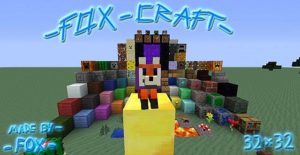 Before you get excited, no, Fox Craft is not a Resource Pack from the Starfox universe. This creation of -Fox- (whose name is very appropriate) is simply based on the fox.

The most obvious change in this regard is that of the wolf, who becomes a fox, but also villagers, who have the face of this animal. More broadly, this pack imposes the landscapes a great vitality, with animated textures that energize the game.

In a different register, Fox Craft defines a rather singular style, halfway between faithful and originality. With a resolution in 16x, it sticks easily with the initial spirit of the game, but puts his paw on some blocks with patterns sometimes quite incongruous, including spirals. In any case, the author of the Resource Pack declares with one goal in mind: to create something visually pleasing, in which the player does not feel assaulted. It is clear that the grain of the pack reaches this goal, but especially its colors. With a warm color palette, golden and orange, Fox Craft gives the impression of being in summer, in a landscape peacefully steeped in rays of sun, with a touch of cartoon that completes to establish this tranquility dear to the creator.