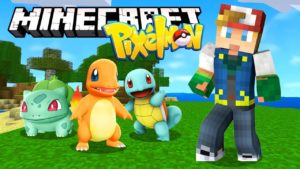 Pokémon and Minecraft are among the two biggest franchises in the history of video games. Derived from radically different platforms, the two games have federated a passionate and sustainable community that constantly finds something to reinvent itself. In these conditions, the encounter between Pokémon and Minecraft was inevitable. With Pixelmon, discover your Minecraft world from a new angle. Capture Pokémon, build a team, train them and win battles against other players! The whole in a universe taking up the standards of these games of Nintendo: Trainers, centers Pokémon, but also fossils and various materials.

Pokemon, as in the game of Nintendo, are classified by type. There are several types (Insect, Darkness, Dragon, Electric, Combat, Fire, Flight, Spectrum, Plant, Ground, Ice, Normal, Poison, Psy, Stone, Steel, Water), which will define the weaknesses and advantages of pokemon. For example, a fire pokemon will suffer twice as much damage if the attack of the enemy pokemon is ice. The mod has 809 different pokémon more or less rare and will appear according to their environment (day, night and biomes). Pokémon evolve according to their level (up to 100). The higher their level, the stronger they will be and have powerful attacks. To increase the level of your pokemon, and so evolve you will have to fight other pokemon and defeat them. The stronger your opponents, the more they will bring you experience. Pokémon also have their own stats (attack, defense, speed, attack speed, and speed of defense). Pokémon may also have different sizes and shapes, and may occasionally give you items once killed. To capture them you will have to use pokéballs, which according to their form will be more or less effective.

Also note that some Pokemon are much more difficult to catch than others. Indeed, the pokemon called legendary or Shiny, appear very rarely.

First of all, when you create a new map, you will have to choose your first pokemon from the different starters available. It will then be transferred to the bar on the left of your screen (resizable with the “O” key). Once you have chosen your pokemon, you can send him to battle with the “R” key. When you have several pokemon, you just have to press ↑ & ↓ to move them in your interface. The pokemon at the top of your interface bar will be your main pokemon, and will be sent to battle first.

Then, to make your comrades gain levels, and thus make them stronger, there are several methods that are: 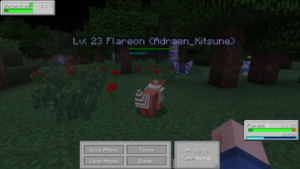 Before capturing a pokemon, it will be necessary to manufacture a pokéball. There are several that each have different characteristics. You can find all the crafts via the mod wiki. 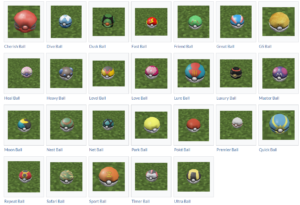 To make the classic pokéball, here are the different steps to follow:

Start by making an anvil and a wooden hammer. The anvil will deposit the various resources needed and the hammer to make them.

You will then have to create the top part of the pokéball, which is what will make it special. For this, you will need an oven, fuel, and noodles. These can be picked by right clicking on a shrub with nipples.

Then place them in the anvil and hit them with the hammer:

To make the lower part of the pokéball, assemble iron or aluminum in the anvil: 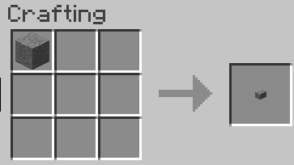 Once the three elements are made, just place them in your craft table to get the pokéball.

Once you have the necessary equipment, find the desired Pokémon. Remember that Pokémon appear in different biomes and times and some are rarer than others. Some Pokémon can not even be found in the wild. Some, namely Legendary Pokémon, Fossil Pokémon and Porygon, are obtained by special methods.

So once you’ve found your target Pokémon, send your Pokémon and fight it. Although it is possible to launch a Pokéball and catch it immediately, weakening the Pokémon will increase your chances of capturing it. If you are able to inflict a condition such as paralysis and sleep, your chances of success will increase further. Different types of pokeballs work better in different situations. Keep in mind that the difficulty of catching different species of Pokémon varies according to their catch rate. Once they are weak, go into your bag via the combat menu and select a pokéball, or another of your choice. If the capture succeeds, the pokéball will stop shaking and a message will appear informing you that the Pokémon has been captured.

It is also possible to launch a pokéball outside a fight using the object. For that, you must target the pokémon and if you miss it, the pokéball may break. If it breaks, you can recover its components to make it again.

To view the summary of your Pokémon, press the “E” key (default) to open your inventory. Next to your character, you will see 6 slots displaying the sprites of your Pokémon. Right-click on the image of the Pokémon you wish to view. A graphical window allowing you to select a summary, its attacks or statistics appear. Left-click on the one you want to see and another graphical interface will appear showing you the information of your Pokémon.

If you want to have more than 6 pokemon, you will need a pc to store them. You can find some in pokemon centers that appear randomly or just make it that way:

Once the PC is found or manufactured, click on it. This will open the PC GUI and you will find the Pokémon that were sent to the PC and you can also put Pokémon in it. If you do not want to have a pokemon anymore, you can free it by selecting it and clicking on the trash icon. To view the summary of a Pokémon on the PC, right-click on the Pokémon and select the information section.

To treat your pokémon, you can either use a treatment station or the bed. The disadvantage of the bed is that it is necessary to wait for the night before being able to cure them. The care station can be in a pokemon center or you can manufacture it in the following way:

Fossil blocks are found in gravel piles at heights ranging from 12 to 50. These are relatively rare finds, so it may take a while to find them. They will occur before the gravel in the world begins to fall due to gravity, which is something to keep in mind while looking for them. Unlike the gravel around them, fossil boulders are not affected by gravity.

To make it will require aluminum plates, redstone and glass:

Once the fossil has been cleaned, you are now ready to turn it into a Pokémon! To turn a fossil into a Pokemon, you will need the fossil machine:

Here are the steps to make the fossil machine: 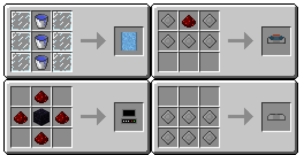 Once you have made the fossil machine, use it with the freshly cleaned fossil. The machine will remove the fossil and start turning it into a pokemon. You can see his progress on the screen. When she reaches 100%, she will tell you to insert a pokéball. Then just recover the pokemon.

To evolve a pokémon with a stone of evolution:

A pokemon like Evoli has several types of evolutions depending on the stone you give him. To obtain the evolution stone, you will have to collect 9 fragments. These are obtainable via elemental stone minerals that you will need to extract with a pickaxe.

Once the elementary stone is made, simply use it on the pokemon you want to evolve. He will take the evolution which corresponds to the element of the stone of evolution.

Pixelmon is a very complete mod. Here, we talked about the basics of mod but there is still a lot to discover. Therefore, it is strongly recommended to use the wiki to understand the whole mod. In addition, a mod like just enough items will allow easy access to all the crafts.