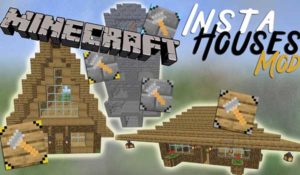 InstaHouses Mod 1.15.2/1.14.4/1.12.2 that will save you having to build a house every time you want to settle in a new place in the world, since it is in charge of offering us the possibility of making prefabricated houses appear with a single mouse click. These houses or, rather, the blocks containing the prefabricated houses can be manufactured in survival mode, from materials already in Minecraft.

How to Install Minecraft InstaHouses Mod ?