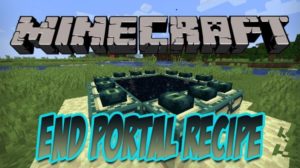 The operation is simple. First we will place a dragon egg, five Ender eyes, and three End stones on a crafting table. If we do it as we can see in the following image, we will obtain twelve portal blocks at the End. Now we place them on the ground, recreating the original structure, filling the blocks with Ender’s eyes. Next we will only have to place a lighter in the character’s hand and make fire inside the portal, to light it.