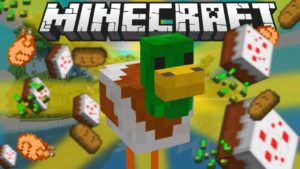 Ducky Mod for Minecraft 1.15.1 With the help of this mod you can create a black duck spawn egg, tame and improve it, and the duck in turn will follow you and protect you from all enemies like a dog.
Unlike a dog, you can improve the duck, increase its health, speed of movement, attack power and even the ability to fly, the pumped duck deals up to 20 hearts of damage and moves at high speed, it will save you from most enemies.

Create a spawn egg: You will get a neutral mob – a black duck. The mob has 15 health and deals 6 damage, you can tame a loaf of bread. After taming, the mob will turn into your guard: The mob has 64 health and 15 damage when attacking. Give the tamed duck potions and it will become even stronger and better. Regeneration Potion

– increase the size of the duck and give 128 health;
Potion of weakness – reduce the duck back Fire
resistance potion – give immunity to fire
Speed ​​Potion – add the speed duck, almost 2x
Power Potion – increase the damage done by the duck to 40 Jump
Potion – the duck will be able to jump and fly at the enemy . 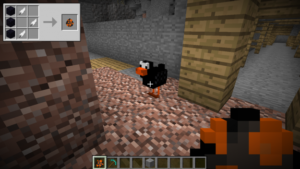