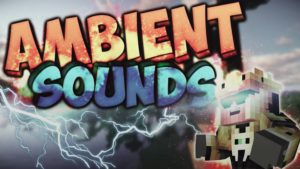 Ambient Sounds 3 Mod 1.15.2/1.14.4/1.13.2 that focuses on adding new sounds to the game, as well as improving some of the existing sounds. The objective of the mod is to increase the immersion of the players by adding more realistic sounds. These new sounds will appear based on three variables. According to the biome in which our character is, according to the dimension and according to the situation.

These new environmental sounds we can appreciate when entering a forest, because we will hear the birds singing. In the hills and mountain tops we can hear the roar of the wind. The sound of crickets in the plains. The singing of frogs in the swamps. Reverberation in the caves. The sound emitted by the owls during the night. And new sound effects when we meet underwater. Check out the following video to get an idea of ​​the new sounds offered by this mod.